Some more photos, including yours truly in the background obviously searching for enlightenment !! 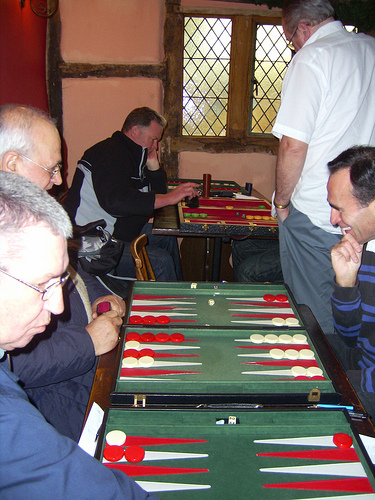 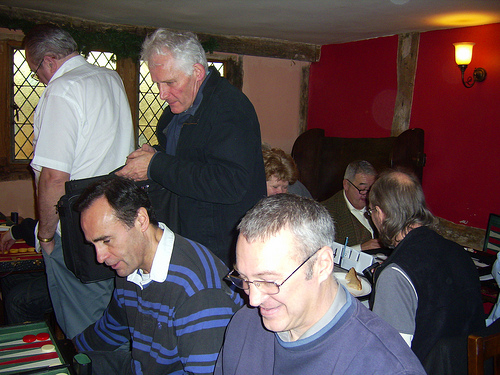 Held in the city centre, near the University, we started at 12 and the final was still going on when I left at 8.

A great time had by all - highly recommended. 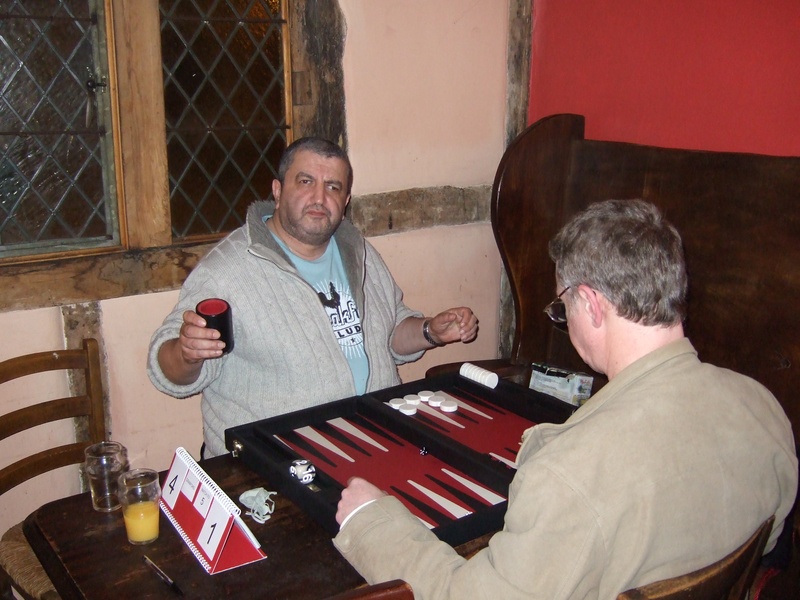 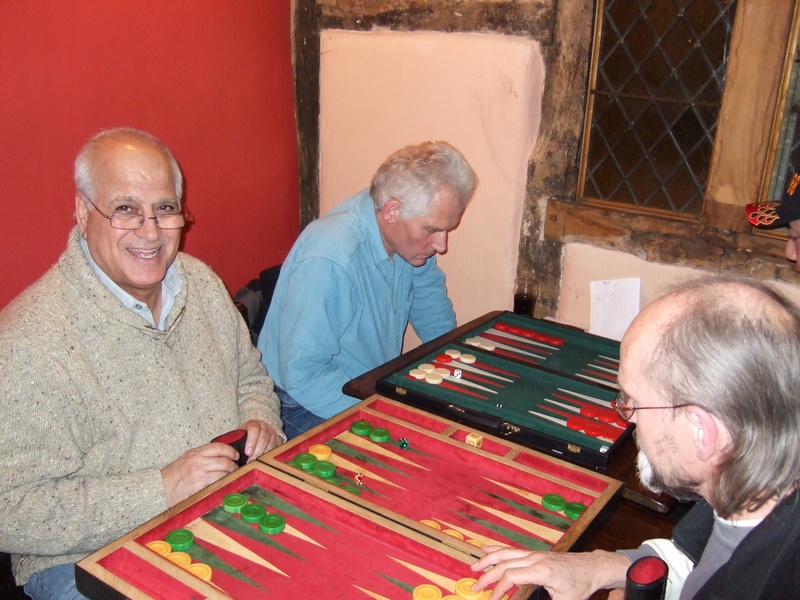 Great night on Sunday - thanks to those attending.

Paul managed to lose an 8 cube to 3 opponents - knew we should have played for money - serves him right for playing so well at the BIBA swiss tourney !!  Congrats on that.

Strange month so next meeting in 3 weeks.

The most recent meeting saw the return of Paul, Jon and Simon 2, many thanks to all who attended. Mr Taylor was otherwise engaged(golfing) but alas the night was a great success, not for me however in the singles tournament as I failed to score a point, no gammon's against me though! Paul introduced a fantastic variant, the name I forget but it was basically three against one, great fun and superb tuition for the doubling cube! Rhod

First to arrive Steve closely followed by Paul, from the Coventry Club.

Straight in we began the 1pt competition, rotating to play everyone. Sue and Rosie represented the ladies corner!

Rhod arrived and dived straight in. Kevin, who had NEVER played before, sat in with Rhod and began a quick learning curve - flying solo by the end of the night.

Two new guys arrived, Simon and Jon, who used to play ad hoc in town, but found us through Freecycle !!

Both good players - hope to see them again.

Finally Shiggy arrived claiming to not have played for 30 odd years !!!!!!  and proceeded to beat me - great

I'll claim I played most of his moves for him !!

Overall a great night - thanks to everyone for making the first one so successful.

Partner and I visited the Coventry Backgammon Club last night - what a great group of people !!

Upstairs at the Whitefriars olde Ale house, a small night for them - 'only' half a dozen members, games were already in progress when we arrived. Immediately made to feel welcome, I was playing a game within 5 minutes of arriving - somewhat more to the point, my partner, who is not that keen on the game, was persuade to start playing as well !! I could overhear her being encouraged and coached in a really friendly manner - more patiently than I normally am !!

Nice atmosphere, helped by a decent folk band practising in the room next door.

Overall a great night out - will be returning - and would recommend a visit to anyone. Only hope we can reach that level sometime.

Thanks again for your hospitality guys (and gal !!)

Just a quick note to wish Bob Koca luck in the world championships, currently being held in Cannes, believe he's in the top half already.

Bob plays online at Dailygammon.com and I've played him twice !  What other sport could you have a chance of that ??

Pity Backgammon organisations are so 'disorganised'  - all links from the main site go nowhere and the nominated broadcasters, online or satellite, provide no search results. Shame.

Thanks guys - you're far too efficient, hope launch goes as well !!!

Thanks to Gareth at Edinburgh Backgammon  - now I know where to go before Murrayfield. Incidentally I can't believe our pre-match pub has burnt down - The Balmoral.  Many sympathies to family and friends of the officer involved.

Thanks to the backgammon guys at the Coventry Club  - Paul, Phil and John who all offered support. be great to see you all.

Seems a 'links' page may be in order !

Our first Club board..

Thank you David Kennedy who donated a board through Freecycle, a natty little green number that now resides behind the bar at The Green Man. Top guy - thanks again.